When is the best time to fly to Philippines?

₱7,800
₱6,570
₱5,340
₱4,106
Whilst there are several times of the year to choose from, September is seen as the time to fly to Philippines, however, it is possible to get good deals throughout the year. April sees the temperatures in Philippines peak to their warmest. August tends, on average, to see the most amount of rainfall.

When is the best time to book flights to Philippines?

The best time to book flights to Philippines is 60 days before your desired departure date. The cost of your flight will likely increase significantly if you book two weeks in advance of your flight.

Which day is cheapest to fly to Philippines?

At the moment, Wednesday is the most economical day to take a flight to Philippines. Monday is likely to be the most costly.

To get the best value, try booking a flight in the morning when visiting Philippines. Generally the prices will increase for flights in the afternoon as these tend to have higher demand.

With more than 7,000 islands making up the Philippines, the hardest decision will be which ones to visit. Manila is capital and main island groups are Luzon, Visayas, and Mindanao. A Catholic country, its people are warm, hospitable and family-minded; its cuisine a delicious blend of Chinese, Spanish, Mexican, Japanese, Indonesian and Indian.

The islands have several international gateways. Ninoy Aquino is the airport at which many flights to the Philippines (and its capital Manila) land. Mactan in Cebu handles flights from Japan, Singapore, and Australia, Davao – regular flights from Indonesia and Singapore.

Manila, on Luzon, boasts one of the best preserved medieval cities in the world. Intramuros, the walled city, covering almost 160 acres, was built by the Spanish in 1571. Damaged during the Second World War, restoration work was started by Imelda Marcos, of shoe fame. Manila Cathedral is at the centre and Fort Santiago at the northwestern tip. Its colourful Chinatown is north of the Pasig river.

The Philippines have a tropical climate, which varies by region. The dry season runs from November to April, and the wet season from May to October. Northern islands such as Baguio and Luzon, as well as the centre, have temperatures between 16 and 32 degrees during the wet season. The temperature range drops a bit in the dry season, ranging between 13 and 23 degrees. Typhoon season lasts from June to December.

When to fly to Philippines

The best time to search for cheap flights to the Philippines and visit the northern and central islands is during the dry season when the days are clear and bright and rainfall is minimal.

The south (Davao) has no distinct wet or dry seasons. Weather is constant year-round and temperatures are about 23-32 degrees. There is no bad time to visit this part of the Philippines.

Ferry services connect the islands while cruise liners dock at the port of Manila.

Philippine National Railways operates the Metrotren. It stretches south to Carmona and Cavite and north to Meycauayan, Bulacan. In Metro Manila, the Light Railway Transit runs from Caloocan to Baclaran.

Other ways of getting around the country include taxis, buses, trikes and the jeepney. The jeepney is a classic, inspired by the American World War II army jeeps. When the American soldiers left the Philippines, surplus jeeps were sold or given to local people. The stripped-down jeeps were fitted with seats, decorated with ornaments and painted in bright colours.

The calesa is a rather touristy way of getting around. It is a traditional horse-drawn carriage brightly decorated that was introduced during the years that Spain was ruler. 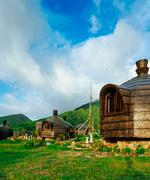 Popular regions to fly to in Philippines